GloFAS is the Copernicus Emergency Service system for global flood awareness, pre-operational since 2011 and fully operational since April 2018. GloFAS forces medium- and extended-range meteorological forecasts from ECMWF-ENS with the LISFLOOD hydrological model to provide openly available probabilistic forecasts of upcoming floods up to 30 days for its global river network.

How are GloFAS forecasts generated?

From GloFAS 3.1, GloFAS modelling chain is based on the LISFLOOD hydrological model forced by an ensemble of meteorological forcings. A 5-day monitoring analysis of the latest observations, either based on the latest ECMWF reanalysis when available, or day-1 of ECMWF ENS control forecast, is used to initialize the forecasts, followed by medium and extended range ensemble forecasts up to 30 days from the ECMWF Integrated Forecast System ENS. ECMWF-ENS is the ensemble forecast of ECMWF and consists of 51 members at ~18 km resolution up to 15 days, increasing to 36 km from day 16 to 30. In GloFAS, the outputs of the 00:00 UTC IFS medium-range runs are used daily for day 1 to 15, and the latest available IFS extended range runs used for day 16 to 30.
The resulting simulated daily hydrological forecasts are compared with reference discharge runs obtained from the same modelling chain. This results in a set of probabilities of exceeding pre-defined flood thresholds of different severity. 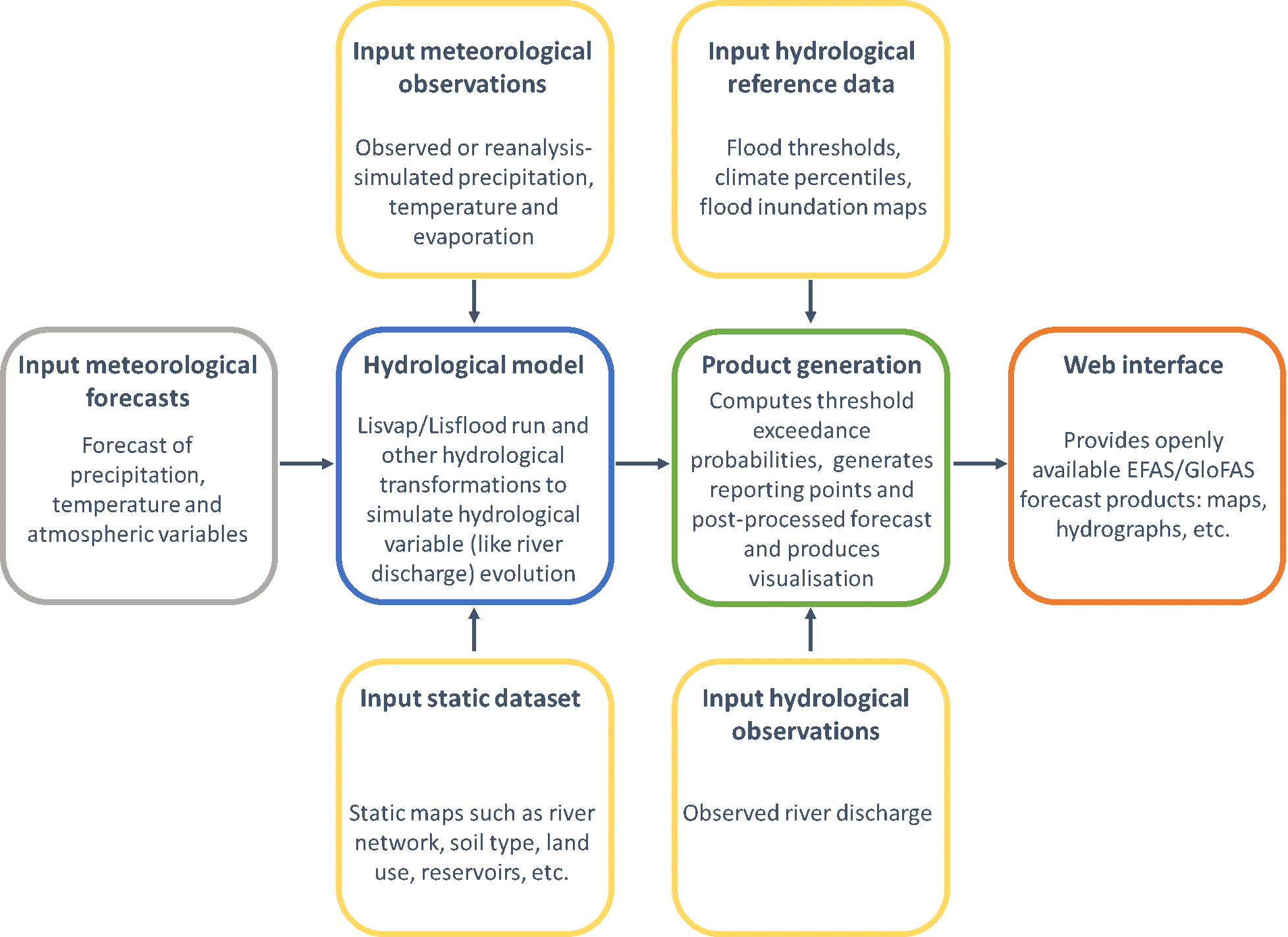 Which products does GloFAS offer?

GloFAS offers a range of forecast products and associated information, accessible via different layer tab of the GloFAS map viewer:

GloFAS reference discharge runs are a collection of discharge simulations as close as possible to GloFAS operational system.
GloFAS forecasts hydrological reanalysis GGloFAS hydrological reanalysis is set of proxy-observation, deterministic time series of hydrological variables, including river discharge, produced from atmospheric forcing as close as possible to observations, using the same modelling chain as in GloFAS and GloFAS Seasonal to avoid the introduction of systematic biases. It is used as initial conditions of GloFAS and GloFAS Seasonal reforecasts, to calculate discharge thresholds for GloFAS, and to conduct GloFAS and GloFAS Seasonal forecast skill assessments
GloFAS reforecasts are forecast simulations performed for a set of past dates, based on a configuration as close as possible to GloFAS operational setting, initialised using GloFAS hydrological reanalysis. GloFAS reforecasts can be used to analyse GloFAS forecast skill systematically over a long period.
GloFAS forecasts discharge thresholds are a set of maps of discharge magnitudes corresponding to the 2-, 5- and 20-year return period floods (respectively called Medium, High and Severe Awareness Levels). They are generated by fitting a Gumbel extreme value distribution to the annual maxima series extracted from GloFAS discharge timeseries of the hydrological reanalysis using the method of L-moments. GloFAS discharge thresholds are used to generate flood awareness forecast maps

GloFAS data is a gridded dataset at 0.1° horizontal resolution. It contains:

For more details on the latest GloFAS configuration, please refer to the GloFAS wiki pages.