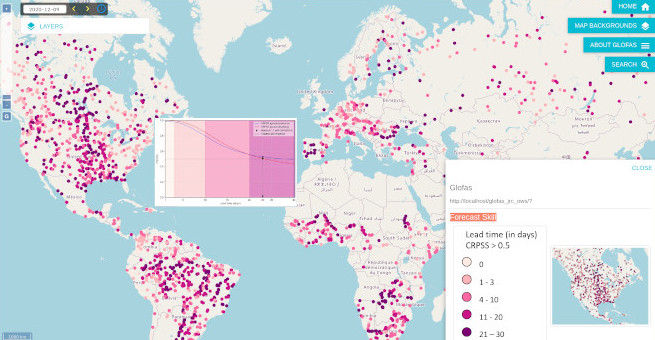 On 9 December 2020, the Global Flood Awareness System was upgraded to version 2.2. This includes the following features and new products. 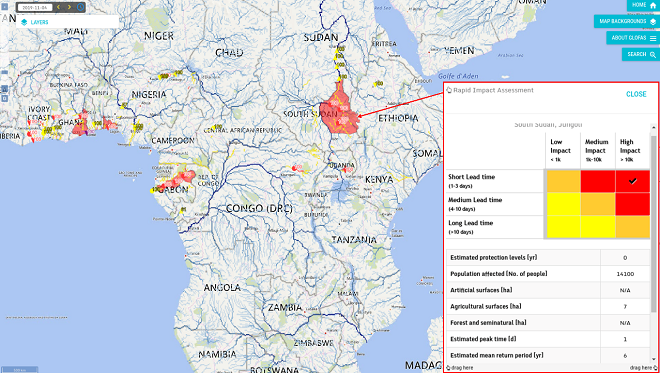 On 5 November 2019, the Global Flood Awareness System was upgraded to version 2.1. This included the following features and new products: 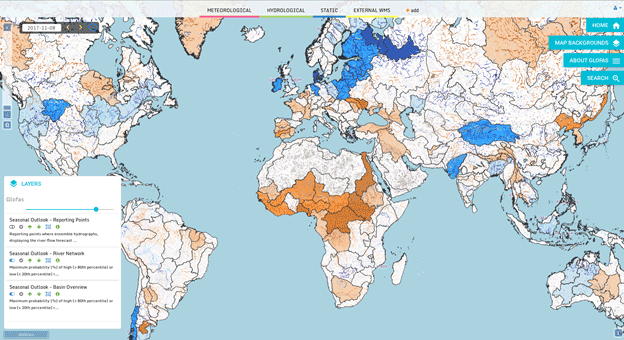 Comparison with typical and extreme conditions from climatology 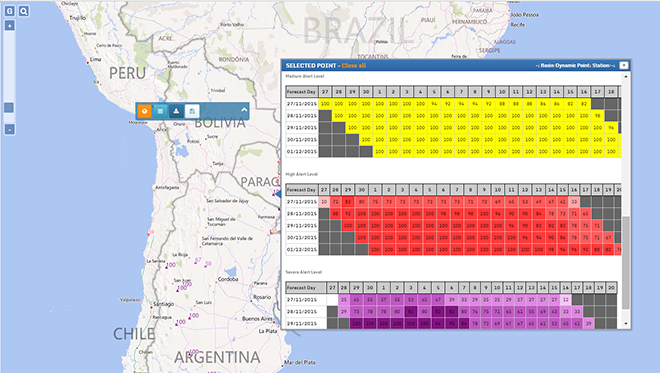 Flood early detection up to 30 days in advance

(depending on the river basin size)

Visualisation of hydrographs at specific locations

Comparison with flood return periods derived from the climatology 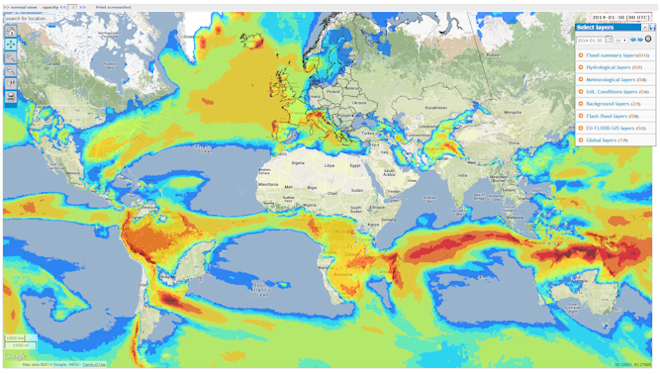 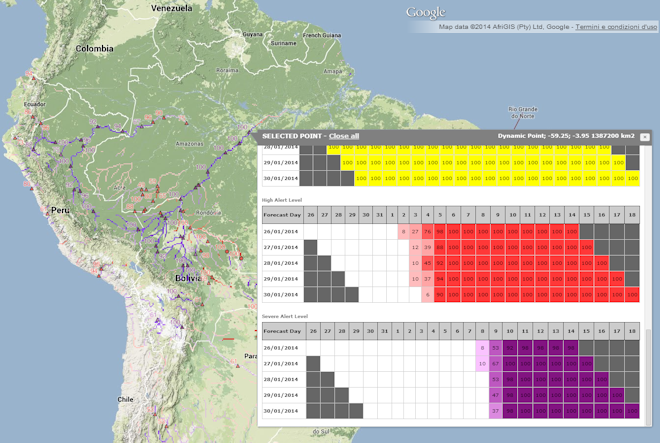 The Global Flood Awareness System - GloFAS in a nutshell

The Global Flood Awareness System (GloFAS), jointly developed by the European Commission and the European Centre for Medium-Range Weather Forecasts (ECMWF), is a global hydrological forecast and monitoring system independent of administrative and political boundaries.

It couples state-of-the art weather forecasts with a hydrological model and with its continental scale set-up provides downstream countries with information on upstream river conditions as well as continental and global overviews.

GloFAS produces daily flood forecasts (since 2011) and monthly seasonal streamflow outlooks (since November 2017). GloFAS has been fully operational as a Copernicus Emergency Management Service since April 2018.

Hydrological modeling
River discharge is simulated by the Lisflood hydrological model (van der Knijff et al., 2010) for the flow routing in the river network and the groundwater mass balance. The model is set up on global coverage with horizontal grid resolution of 0.1° (about 10 km in mid-latitude regions) and daily time step for input/output data. Read more >>
Meteorological data
To set up a forecasting and warning system that runs on a daily basis with global coverage, initial conditions and input forcing data must be provided seamlessly to every point within the domain. To this end, two products are used. The first consists of operational ensemble forecasts of nearsurface meteorological parameters. The second is a longterm dataset consistent with daily forecasts, used to derive a reference climatology. Read more >>
Case studies
2008 - 2014 Myanmar and Nepal
This case study provides a summary of the results for the performance of the GloFAS ensemble mean discharge forecast compared to observations for several locations in two river basins, the Ayeyarwady in Myanmar and the Narayani in Nepal. Read more >>
2010 Pakistan floods
The system demonstrated its potential by detecting a number of flooding events of the past 3 yr in major world rivers, with forecast lead time often larger than 10 days. A striking example is that of the severe floods that hit Pakistan in summer of 2010. Read more >>
Map Viewer
Last Update on 09/12/2020 Get In Touch

On 9 December 2020, the Global Flood Awareness System was upgraded to version 2.2. This includes the following features and new products: 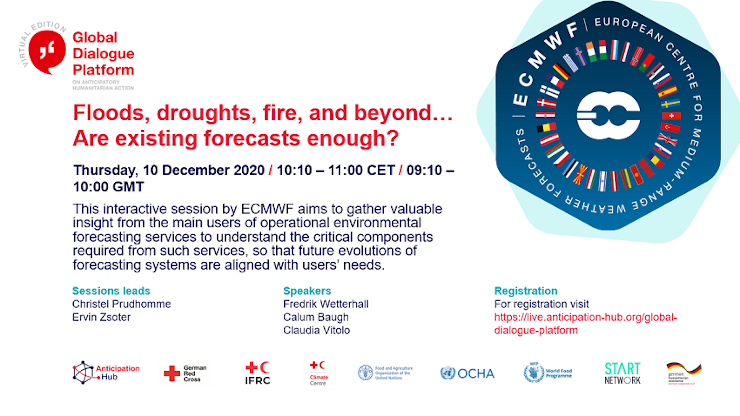 We invite you to participate in the 8th Global Dialogue Platform on Anticipatory Humanitarian Action held virtually from the 8-10 December 2020.

ECMWF will host an interactive session on ‘Floods, droughts, fire and beyond… Are existing forecasts enough?’ …

Join us at the Global Flood Partnership virtual conference!

The Global Flood Partnership (GFP) is organizing four webinars as a replacement for the GFP annual in person meeting. These 2 hour long webinars are provided at no cost and take place November 4th, 11th, 18th, and 25th at 3pm (UTC + …

In 2019, forecasts from the Copernicus Emergency Management Service’s Global Flood Awareness System (GloFAS) were used to provide real-time emergency flood forecast bulletins to support international humanitarian decision-making ahead of and during two devastating tropical cyclones, Idai and Kenneth, in …

The UN released $5.2 million dollars in humanitarian aid to the people of Bangladesh on 4 July to prepare before a forecast flood peak in mid-July. The finance trigger was based on the Copernicus Emergency Management Service (CEMS) Global Flood … 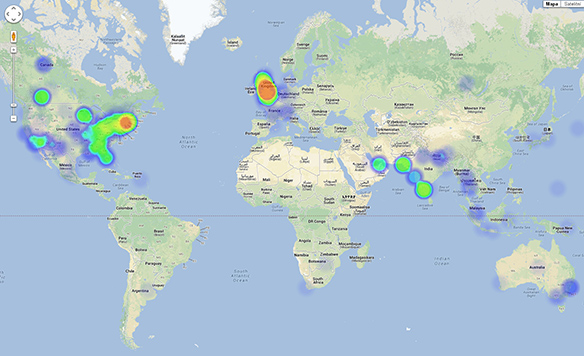 This example shows an aggregated 24 hours filtered flood signal from Twitter for 24th of July 2013 in form of a heat map (read color=high signal). It is considered as a valid signal Twitter messages containing top 25 bigrams extracted from Twitter streaming over the last 10 days prior to the day of 24 hourly analysis.

Hover the map and zoom in with mouse wheel!